The ever-evolving literature of diabetes pathophysiology. From the triumvirate to the ominous Octet and now, the Egregious Eleven. We will briefly review the musical chords of the diabetes mellitus tune!

DeFronzo, in 1987, described the Triumvirate of Beta-cell dysfunction, muscle, and hepatic insensitivity to the glucose-lowering effects of insulin[1]. It was postulated that insulin resistance at the liver contributes to fasting hyperglycemia (increased hepatic glucose output) in the early stages of type 2 diabetes mellitus (T2DM). Beta-cell dysfunction and insulin resistance at the level of skeletal muscle promotes hyperglycemia in the post-absorptive state(decreased glucose uptake). A defect that is demonstrable on the standard oral glucose tolerance test[2].

The triumvirate, which was for a while central to our understanding of T2DM, has since been upstaged by more flowery mechanisms.

The diabetic tune was again postulated to include dysregulation at the level of adipocytes[2].

1) Adipocytes are resistant to the anti-lipolytic action of insulin. This leads to increased liberation of free fatty acids (FFAs) in the fasting state[3].

3) Dysfunctional adipocytes produce an excessive amount of pro-inflammatory adipocytokines (tumor necrosis factor, interleukin-6, resistin, and angiotensinogen) at the expense of more insulin-sensitizing adipocytokines such as adiponectin[4].

The Quintessential Quintet acknowledges the contribution of the gastrointestinal tract in the pathogenesis of T2DM. What is the incretin effect? – An oral glucose load stimulates a more considerable increase in insulin secretion compared to an intravenous glucose bolus. Indeed, the “incretin effect” occurs as a result of two critical peptide hormones secreted by the digestive tract. Glucagon-like peptide 1 (GLP-1) secreted by the L-cells of the ileum is woefully inadequate in patients with T2DM. GLP-1 is, therefore, unable to inhibit the secretion of glucagon (a counterregulatory hormone in carbohydrate metabolism). GIP secreted by the proximal small intestine, on the other hand, is increased but is unable to mediate its target organ effects on pancreatic beta cells (i.e., insulin secretion).

1) Loss of the glucagon lowering effects of GLP-1 results in hyperglycemia during the post-absorptive state. Unchecked hyperglucagonemia promotes an increase in hepatic glucose output[5].

Pancreatic alpha cell dysfunction leads to significant hyperglucagonemia in the fasting state. This is an essential cause of fasting hyperglycemia[6]. 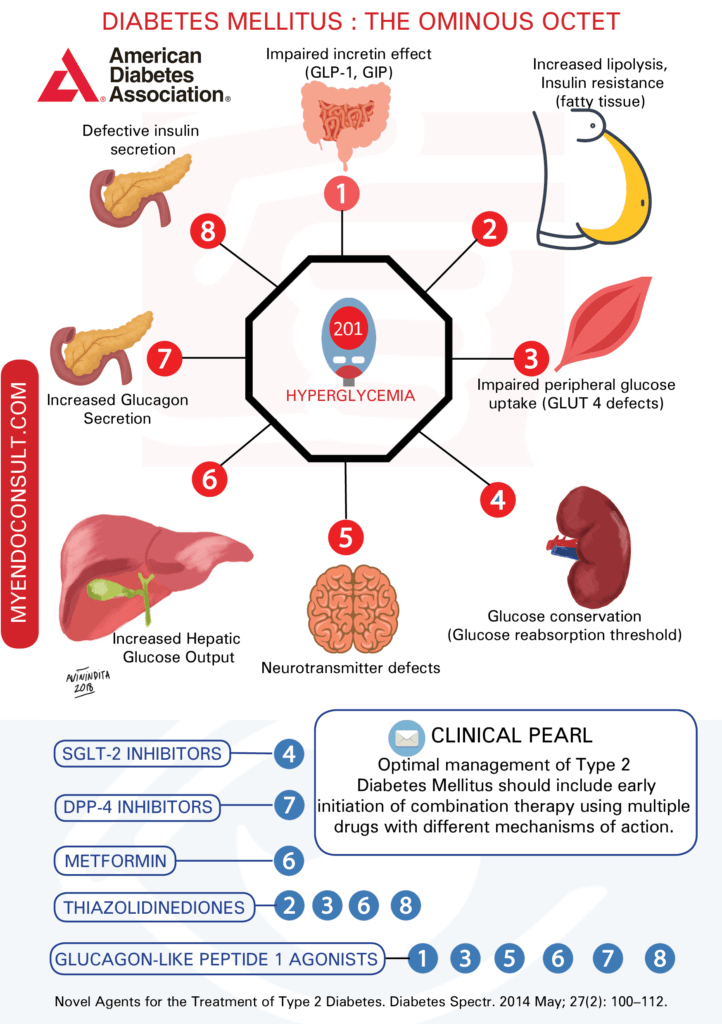